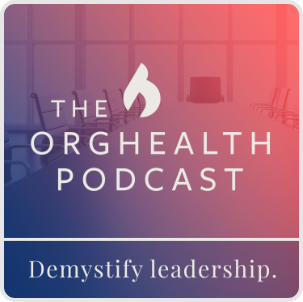 It's not surprising that leadership teams abandon weekly meetings—it's so rare to see teams running these meetings effectively! In this episode, Margot and Jim present the framework which leans on the Thematic Goal and gives leadership teams the ability to run productive, energized weekly meetings together in just 90 minutes. We'll take two episodes to cover this topic, so make sure you listen in for both!

How to Run Daily Standup Meetings

How to Run Strategic Meetings

This week we're tackling what we call the tactical meetings. So every week the executive team meets for about 90 minutes to make sure that the essential critical work needing to be done is going to move forward with the best impact for the company.

Right. And it's actually a bit radical because it turns out that, while every leader knows these kinds of meetings should be happening, most of them kind of give up to the idea that we're all so busy that we can't quite fit them in. So weekly meetings, as good as that idea sounds actually aren't that common in lots of companies.

So you mean that everybody ends up working in silos, so they're just looking at their own area of responsibility. So they're not even realizing what the big picture is.

Sadly, yes. They're, they're so focused on, here's my job description, here's my kind of bonus criteria. I'd better keep my nose to the grindstone, so to speak. And they're oblivious to what everyone else is supposed to be doing or is doing.

So one of the best pieces of this is the company leaders are brought together by a weekly meeting so that they're all on the same page. They're all working on solving the most important issues of the day or of the week or of the month, helping each other make the best things happen, reinforcing the big picture... Just, rather than being just sucked into the minutia.

Yeah. Yeah. So that's the big picture goal that we're talking about, and the clarity that this team, every team, needs to create for the company is expressed through a number of factors, but one is the thematic goal. It's kind of the centerpiece of clarity. What's the big thing that we need to make sure happens in the next 6 to 12 months? That's the thing that's going to catapult us forward as a company.

So this is really powerful because it's the executive leadership team's collective goal. It comes with supporting objectives. And it really breaks down the idea of working in silos. It prevents it.

Right. And meanwhile, I mean, there are standard operating objectives. So this is the kind of thing that, like, the metrics that any company is always tracking and that the executive team is looking at closely, stuff like total revenue.

Right, and profit, and employee satisfaction...

Yep, customer satisfaction. And there's, there's a long list of what might be the standard operating objectives for your company. We're not saying these are the ones that they have to be. You figure out what the things are that you're watching closely all the time.

Okay. So what does the weekly meeting actually look like?

Okay, well, we'll get there, but let's first highlight how these are different than typical meetings. The big difference is there's no agenda. Ooo! What a thought! Well, there's no agenda because there's a system, there's a process of how we do every one of these meetings. We don't need an agenda. There's no pressure to preplan. People know that typically you do need an agenda, but they don't have time, so they show up and maybe put something on the table that they printed out or write something on the whiteboard. This takes all the pressure off that. There's no agenda for the weekly tactical meeting.

Yeah, and I think that's right, and a lot of people would think that that was really, really weird. So let's just talk about how that meeting does work.

There are six stages. Let's start with the first one. We call it the lightning round. It's very similar to the daily standup, and we've just talked about that last week, but there's a bit of a twist. There's a special emphasis on making sure that roadblocks get shared and where, instead of asking what's most important today, we're saying, what are the big three things you're working on this week? We just simply get everyone around the table to go through three big things this week and any roadblocks.

So then you just jot them down as potential topics for discussion.

Right. So then the second one, the second stage is the scoreboard. Talk about that.

So everybody on the team, preferably before they actually even arrive at the meeting, decides on a color code for each of the defining objectives and the standard operating objectives. So I like to think of it like a stoplight. Like red is trouble. This is not going ahead as we think it should. So we need to take a look at it.

Mhm, and then yellow is concerned. Maybe there's just questions we’ve got about this or we're not even informed about it. So we should talk about this as a team.

Right. And then if you've classified it as green, it's good to go. Everything is going along as it's supposed to, as you've expected, and you don't even need to discuss it.

Right. So this scoreboard stage is about seeing where everybody stands on the progress that we're making towards the defining objectives and the standard operating objectives.

And it informs the team about what the meeting agenda needs to be. So the things that are rated red, they need some discussion. So, the highest number of reds make it the highest priority on the agenda. And then you interweave roadblocks with the same ranking based on urgency and importance. So for anyone who is having trouble visualizing exactly what this looks like, if you go to OrgHealth.Coach, we'll have a sample scorecard there for you to look at. Jim, you want to talk about what that is?

Yeah, so let's say the thematic goal is double production. It's a company that has been working on a new product and they've got the production working, but now they need to scale. So they've identified three defining objectives: refine the production system, catch and learn from flaws, ramp up distribution. So, yeah, the team would come together and before they even get there, they're thinking, how are we doing on refining the production system? Well, the guy who is leading production, he will have a very strong opinion about that based on his experience doing that every day. The person who happens to be on the leadership team who's from the legal department, you know the corporate counsel, they might not have a clue. So she says it's red, and he says it's green, and someone would argue, well, he's right because he's the one that's there. And what we're trying to help the whole team realize: great that it's refining—that the progress is being made, but terrible that the team doesn't know about it.

And it's very appropriate that she would flag it with a red category code because, for whatever reason, she hasn't been updated about where things are at. They have to solve that problem as a team about team communication.

Yes. So at this point we're about 15 minutes into the meeting,

Right. It shouldn't take long to get this kind of groundwork established so that you can have a productive tactical meeting.

Yeah, and we've covered what the team typically spends about 10 minutes doing in the daily standup meeting and we've got a time sensitive agenda established.

Right. So, very fruitful. Nobody had to do special pre-work to come. They just show up at the meeting and dive right in. And within 15 minutes now they're ready to really talk about the meat of the issues. Well, we've got a nice start into the conversation about weekly tactical meetings and there's a lot more to talk about. That's what we're going to be building on next week. So remember, as long as you've got the groundwork of having a thematic goal, defining objectives, standard operating objectives, you've got everything you need to be able to hold very fruitful meetings every week to keep moving the ball forward.

So go and set the groundwork to make your weekly meetings better, and we'll dig into them further next week.

Okay. We want you to go out and try what we've talked about today on your own leadership team.

You can ask us questions or download notes from this episode at www.orghealth.coach. We'd love for you to join us next Thursday on The OrgHealth Podcast.

Keep pushing for organizational health in your company!

We don't have a regular schedule for our articles or podcast episodes, so you won't suffer from inbox overload, but know that you can unsubscribe anytime and that your information is always kept safe.